Cleo Pinafore, Tilly and the buttons

From Instagram I knew Cleo was a popular pattern but being at the Knitting and Stitching show a few weeks ago made me realise just how popular Tilly and the Buttons, Cleo Pinafore was. Me and Gabby had ours on…and so did every other person at the show! There was a small army of Cleo wearers!! 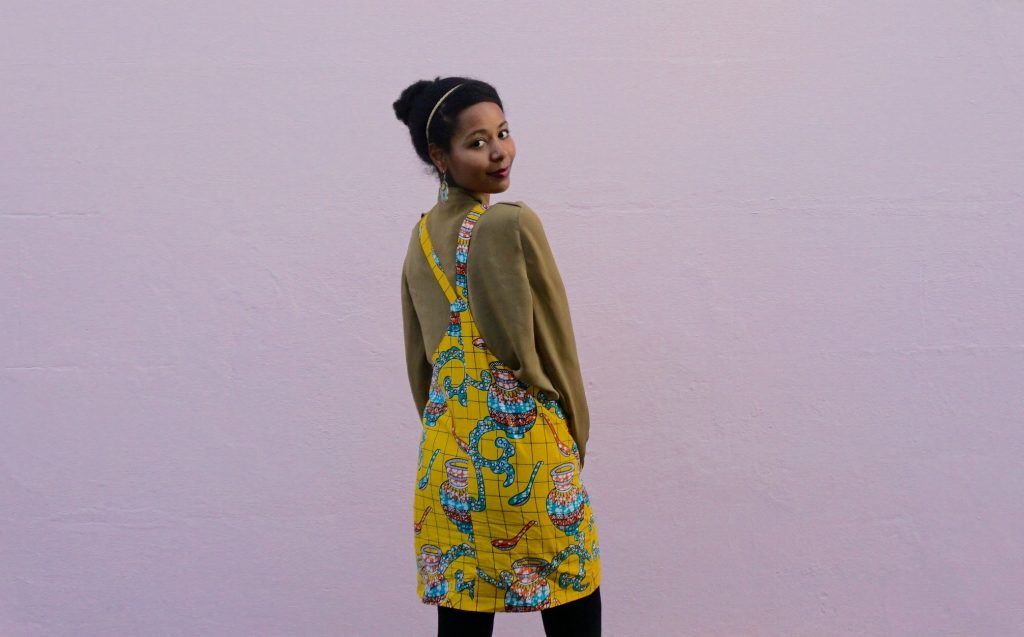 So long overdue and probably a little redundant, here’s my review 😀

The Cleo by Tilly and the Buttons and if you have Instagram you would have probably seen a lot of these already!

It’s a simple, quick sew and so SO comfortable to wear. This was my first make of the year and my sewjo had turned to dust. This Cleo took me three days (I’ve read it take people a few hours) and this sew was purely to fall back in love with sewing again…and it did just the trick. Slowly, with many tea breaks and Netflix on, this pattern came together easily with not much thinking. 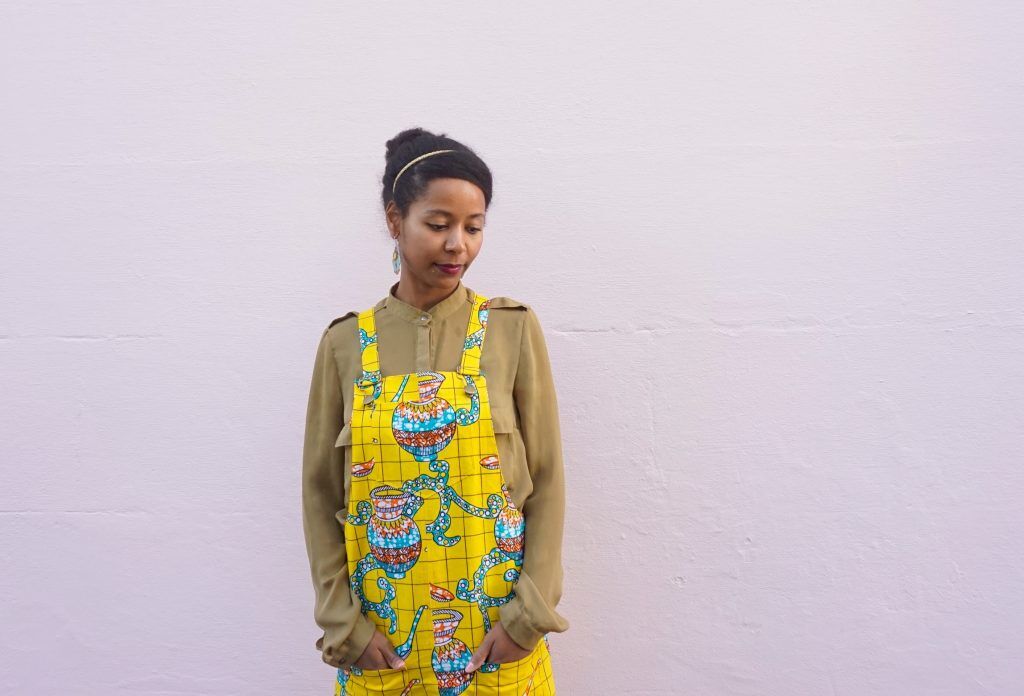 This is the second Cleo I’ve sewn and I sewed a straight size 3….which really i shouldn’t. I should have gone between size 3 and 4 at the hips (I’m a pear) but I really like the fit to be tighter at the hips and think it is really flattering. The pattern has enough ease so going for the smaller size doesn’t make it uncomfortable. However, it is a bit of a squeeze getting it over my bum….and if I put on any weight it might not fit….but that’s the gamble I’m willing to take!!!

I shortened the pattern by 4 inches….I do like a short skirt! After I finished I thought that it might be a little too indecent with the split at the front but I think it’s fine and I don’t feel self conscious.

And not really a change…more of a mistake, I put the dungaree buttons on the wrong place *facepalm* I put them on the marking for the pocket!…Hope it’s not too obvious but D: 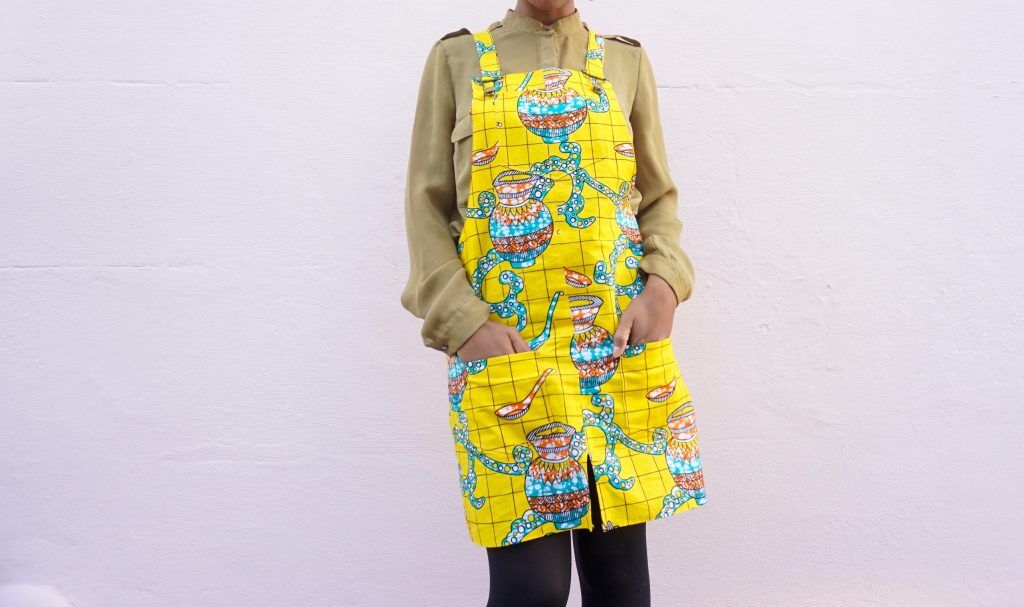 This was some of the fabric I bought back from my trip to Uganda. You have to buy fabric in 6 yard pieces so you might be familiar with it as I gave some to Gabby, I knew she would love the fabric and I love it also, she made a gorgeous skirt. African wax print is glorious to work with. Easy to cut, work with and sew AND the most amazing colours….AND cheap!!! This fabric cost me about the same amount it costs in London £12 for 6 yards. Not sure why I didn’t work with this stuff when I was a beginner….I went with even cheaper, slippery stuff that left me with unwearable monstrosities and made sewing much harder than it needed to be. 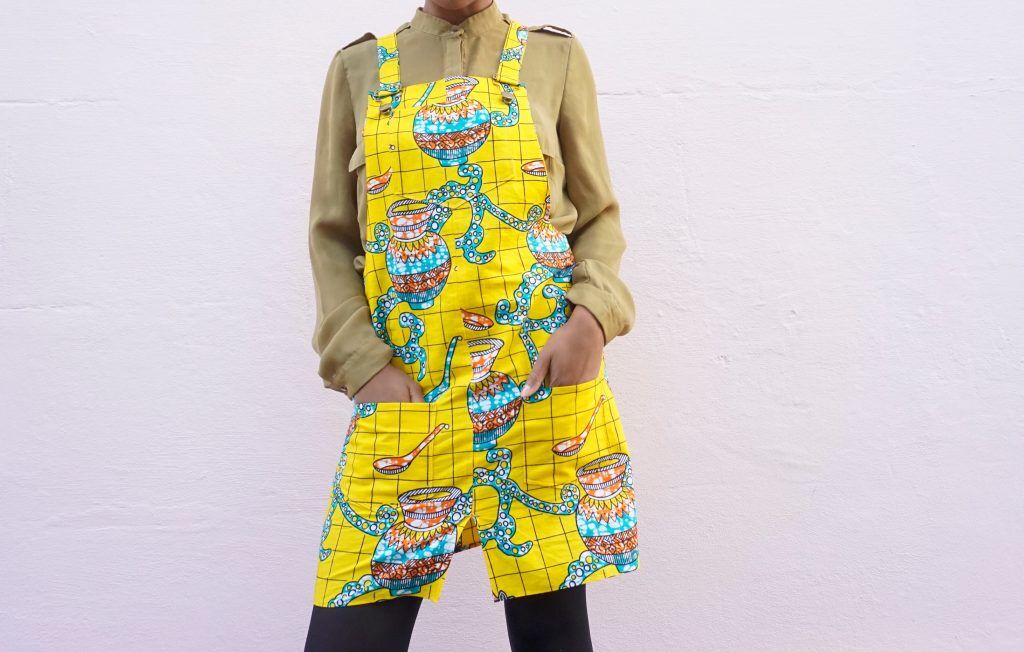 I made no attempt to pattern match. The only place I did bother was on the pockets and even then the pattern is ever so slightly off because I didn’t hand baste it down. I also didn’t overlock the edges. I just used pinking shears and it’s holding up great…This was a very chilled out sew!

I will add African wax print is so stiff! Having the split at the front with this fabric is very useful..I take big strides :p

If you’re interested you can have a look at some of the other fabric I bought back from Uganda in this vlog I did…There are some beauties :p

Completing a sewing challenge with over a week to spare...This is sky falling down territory!

END_OF_DOCUMENT_TOKEN_TO_BE_REPLACED

I've been avoiding this little corner of internet I created this year (hello Spring!!) and sharing stuff online that the majority of my...

END_OF_DOCUMENT_TOKEN_TO_BE_REPLACED

My name is Megan and I am that one person at a sewing meet-up that is wearing RTW clothes. I don't know how many of you get that eager...

END_OF_DOCUMENT_TOKEN_TO_BE_REPLACED

This is my quick and dirty toile of the Rosa. I've not posted my toiles before (mostly because it is rare that I make them!!) but I tho...

END_OF_DOCUMENT_TOKEN_TO_BE_REPLACED

This top makes me incredibly happy. The fabric was of course a total impulse, love at first sight, buy...after swearing off pale pink. ...

END_OF_DOCUMENT_TOKEN_TO_BE_REPLACED

I didn't know if I promised too much in my last video but I've never been more resolved to stick to my sewing list and sewing deadline ...

END_OF_DOCUMENT_TOKEN_TO_BE_REPLACED

I've been a hive of sewing productivity having publicly pledged four makes on youtube this month, which is two more than my usual outpu...

END_OF_DOCUMENT_TOKEN_TO_BE_REPLACED

This is me playing catch up with a make that's a few months old. I recently wore it out to a Nigerian musical Wakaa and the amount of A...

END_OF_DOCUMENT_TOKEN_TO_BE_REPLACED

Hello and oh dear me it's more than halfway through the year *inner cry* summer is fully here so I decided to make something for Autumn...

END_OF_DOCUMENT_TOKEN_TO_BE_REPLACED

Anderson Blouse, Sew Over It

I'm so conflicted, I really want to love this pattern but have some issues that need to be resolved. Namely in the two days I've worn t...

END_OF_DOCUMENT_TOKEN_TO_BE_REPLACED

So, is it too soon for co-ords to make a comeback? My sewing is only fairly recently yielding wearable items so the co-ord trend, plus ...

END_OF_DOCUMENT_TOKEN_TO_BE_REPLACED

When my mum saw my completed Asaka Kimono she immediately ordered one for herself. Floor length, of course, my mum likes to sweep into ...

END_OF_DOCUMENT_TOKEN_TO_BE_REPLACED

10 thoughts on “Cleo Pinafore, Tilly and the buttons”

This site uses Akismet to reduce spam. Learn how your comment data is processed.